The Saint Books by Leslie Charteris

My apologies to anyone who bought Enter the Saint based on my raves in an earlier post. This was a very early entry in the series (1930) and the writer was still developing his hero. (Initially, an adolescent James Bond type.) The only other Saint book I've read has been Follow the Saint (1938), which I enjoyed much more. The truth is that I came to love the Saint stories via movies and old radio shows long before I discovered the so-so novels.

Leslie Charteris began writing the books in 1928 and continued until 1963. The suave, wise-cracking Robin Hood figure caught the imagination of the American public, spawning movies (with the inimitable George Sanders), copycat movies (also with Sanders) , comic books, radio shows (superbly done by a young Vincent Price), and a popular T.V. series with Roger Moore. The regrettable 1997 film character (played by Val Kilmer) bears no resemblance to the original debonair protagonist.

Simon Templar (S.T. = saint) is a droll sophisticate who follows his own code. Like Zorro and the Scarlet Pimpernel he is a "good guy" who is on the wrong side of the law. His mix of worldliness, boyishness and  good humor endeared him to gazillions of fans. Charteris describes him as a "flippant dandy with the heart of a crusader, a fighter who laughed as he fought, the reckless, smiling swashbuckler, the inspired and beloved leader of men..." (p. 123) 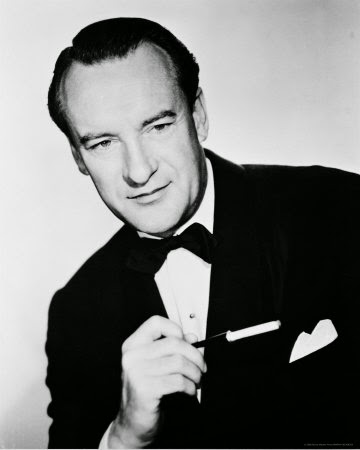 In the afterward to Enter the Saint, Ian Dickerson explains why the series was so popular: Aside from the charm and ability of Charteris´ storytelling, the stories, particularly those published in the first half of the ´30s are full of energy and joi de vivre. With economic depression rampant, the public at large wanted escapism. And the public got what they wanted in the chain-smoking, elegant outlaw. And in spite of the smoking and drinking (which were considered highly glamorous), there's a lot of good clean fun. Apart from Templar, my favorite character in the books is the homely, down-to-earth Inspector Teal who is a perfect foil to the reckless gallant.

(Be forewarned that the books and films contain stereotypes that were common in the '30s and '40s.)

We've enjoyed both the old radio show and the Roger Moore TV series. If you ever watch the Canadian sitcom Corner Gas (not especially recommended), there's an episode about a small-town book club that's supposed to have a literary flavour, but the only male member of the group is reading The Saint in New York, and he gets all the ladies turned on to his book choices, to the disgust of the woman who started the group.