The Value of Fairy Tales - Part One 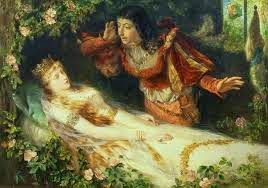 I just finished reading The Sleeping Beauty, which was a poignant reminder of how much I love fairy tales. Why would a 50-something, no-nonsense mom/teacher/missionary who hates sappy books and gushy movies, have a yen for this kind of thing? Aren´t fairy tales unrealistic and unhealthy?

Both G. K Chesterton and C. S. Lewis believed in the power of story to transmit eternal truths. Some would argue that fairy tales are hogwash. (In my early years as a homeschooler I read many diatribes against them.) But I tend to agree with Victorian author Juliana Ewing who wrote:

Fairy tales have positive uses in education, which no cramming of facts, and no merely domestic fiction can serve. Like Proverbs and Parables, they deal with first principles under the simplest forms. They convey knowledge of the world, shrewd lessons of virtue and vice, of common sense and sense of humor, of the seemly and the absurd, of pleasure and pain, success and failure. . . . They treat not the corner of a nursery or a playground, but the world at large, of forces visible and invisible, of Life, Death, and Immortality.

If you read my post on On The Shoulders of Hobbits, you will remember the quote on how politically correct stories have taken the place of  fairy tales. Now instead of virtues such as courage, honesty, and self-sacrifice, we are starving our children´s moral imaginations by teaching them that the highest virtues are tolerance, multiculturalism and environmentalism. Ugh.

Obviously, not all fairy tales are created equal and discerning parents must choose carefully. Hans Christian Anderson is often too dark for my tastes (even though I know the deaths in his stories mirror the self-sacrificing love of Christ). Some versions of Rapunzel have her getting pregnant out of wedlock; other stories deal with problems such as injustice (Cinderella), abandonment (Hansel and Gretel), cruelty, greed and imprisonment (Rapunzel). But it is in the context of these stories that children learn that evil can be overcome. As Chesterton so famously said, Children know that "dragons" (evil) exist. Fairy stories tell them that dragons can be killed. (paraphrase from Tremendous Trifles)

My next post will go into more detail of the lush prose and spiritual imagery of Charles Evan´s version of Sleeping Beauty.

I too am a big fan of fairy tales and have always loved the imagery.
I remember in the dark ages of home schooling and lots of times I spent too much throwing the baby out with the bathwater, I was so glad when I was reading G.K and C.S. Lewis and how they loved the Fairy Tales so I am glad I never did get rid of them. I am glad we read them for school.
I still read them now, for fun. Though my favorite still continues to be Beauty and the Beast.
I am looking forward to Sleeping Beauty and your thoughts.

Like Farm Girl I have also tossed out the baby with the bathwater at times. Some of my children could not handle the frightening elements, and that contributed to it.

However, I can see how fairy tales can be valuable. And they are certainly a lot of fun. I'm glad my children, too, enjoyed many of them...but not Hansel and Gretel!

I grew up reading fairy tales, and I can see both sides of the issue, but I have always loved them!

I have no problem with multiculturalism and environmentalism - indeed, I think they can both be part of a healthy Christian worldview. As can tolerance (though obviously not tolerance of everything!). I wouldn't call them the greatest of virtues, though - that place is reserved for love.
And I do like fairy tales, although not the ones where something sadistically nasty happens to the villain at the end. Forced to dance in red-hot iron shoes? Rolled down a hill in a barrel full of spikes? Children do not need to know about such horrors, and frankly neither do I.