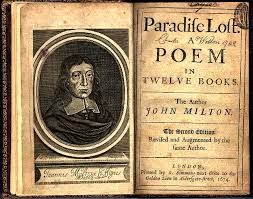 It's been two weeks since I finished Paradise Lost and I'm still speechless. It is a work of astonishing beauty and unforgettable imagery, which rightly deserves its place in the canon of the world's greatest literature.

But here I must make a confession: It took a tremendous amount of determination to finish it. And I only made it through with the help of several other resources. First, I found John Milton's Paradise Lost In Plain English which included a simple paraphrase along with the original text. I am pretty good at reading antiquated English, but even so I needed the "translation" about half the time.

As a child I was not fond of peas and was often sent to the basement to finish my meal. Reading Paradise Lost was a bit like sitting on those basement steps, struggling to get down each bite. But, lo and behold, I discovered an ally in Leland Ryken who encouraged me to keep going via his series, Christian Guides to the Classics.

Ryken, an English professor at Wheaton College, has written a booklet outlining the major themes of Milton's masterpiece. He also supplies discussion questions and many insights into the book of which I was unaware, especially that PL mirrored all the great epic stories while at the same time turning them on their heads.

I could keep on gushing about the book, but luckily for you I have a bad cold and I'm leaving Brazil in less than a week (!) and don't have the time or energy to write more. I'll leave you with a few examples from the book.

After Adam and Eve sin, Christ says to his Father:

I go to judge on earth these thy transgressors, but thou knowst, whoever judged, the worst in me must light, when time shall be, for so I undertook before Thee; and not repenting, this obtain of right, that I may mitigate their doom on me derived. (Lanzara's paraphrase: I'll go judge the sinners. But you and I both know I'll be the one who gets the worst of the punishment. I promised it so they wouldn't have to die and I have no regrets.)

Nor love thy life, nor hate; but what thou livst, live well. How long or short permit to Heav'n. XI-553

Satan mocks God's angels by saying they praise Him with "warbled hymns" and "forced hallelujahs." (II-243).

Contrast that to Milton's view of angels in heaven who "eat, drink, and in communion sweet quaff immortality and joy." V-637

This is another favorite book of mine for 2015.

Posted by hopeinbrazil at 3:00 AM

You inspire me! One day I'll have the time and brainpower to devote to like pursuits (I hope!)