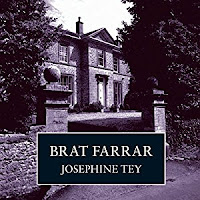 I've written before about free books at Librivox. And I've mentioned previously about how I avoided joining Audible because I thought the books were too expensive, but then changed my mind. Later, when I had a surplus of books I cancelled my monthly fee and signed up for the "Inactive Light" option which was ten dollars a year, enabling me to buy books whenever I wished (at full price) and to receive e-mails about daily deals.

I have LOVED this option for several reasons. First, even though the daily deals are mostly garbage, occasionally a gem pops up like Brat Farrar by Josephine Tey a few weeks ago, and The Secret Garden a few months ago. Both cost about $3 on sale. Secondly, if I download a classic (free) title from Amazon for my Kindle, the same title is often deeply discounted at Audible, just because I own a copy of it. That's how I got a fantastic version of Anna Karenina for almost nothing. (It's usually $23.)

The last time I checked, the "Inactive Light" option was no longer listed on the site, so I called and they said it was available by request.

In addition to Librivox and Audible, I've just discovered that I can get thousands of free audiobooks (movies, music and e-books too) via my Michigan library (even here in Brazil) through something called Hoopla.

Feeling spoiled rotten (and wanting to share the wealth),

What a great way to use Audible! I have the every-other-month option and didn't know this option exists. Thanks for letting me know. I, too, love my library for borrowing audiobooks I don't want to own (like books for my six year old to keep him happy during quiet rest time).