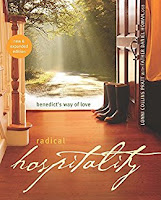 Radical Hospitality is not a book about recipes and table-setting techniques. Instead Father Homan defines hospitality as listening to and opening space for the strangers in our midst. He cuts to the chase by listing the most “dangerous” strangers that most of us can think of: the homeless, the AIDS patient, the Muslim.

Hospitality has two meanings for most people today. It either refers to hotels or cruise ships, or it is connected to entertaining friends and family in the warmth of candlelight with gleaming silver and ivory lace. One model makes it an industry, making it profitable. The other model relegates it to the domain of entertainment and housekeeping…Thus it has become safe and cozy, rather than revolutionary, risky and world-rattling. (p. 10)

The subtitle refers to the Rules of Saint Benedict (480 – 550 AD) which were guidelines for living in monastic community. When St. Benedict wrote of hospitality he stressed the importance of welcoming the outsider, the poor the pilgrim. Benedict understood that guests are crucial to the making of monk. Benedict was a realist; he knew there would always be people at the monastery door. It was a means of grace given to monks, a complicated reality that contributed to the making of their hearts. (p. viii)

The theme of the book is hospitality as a spiritual discipline: Listening is the core of hospitality, and while the people we listen to benefit, in the end we are the ones transformed. (p. 220)

This book challenged me to think in new ways. The only reason I'm not more enthusiastic about it is because of its average prose ("You like yourself better after you've reached out to someone.") its occasionally fluffy theology, and it's unnecessary length. The same truths could have been delineated in half the number of pages. My biggest gripe, though, is that it emphasized grace at the expense of truth. (The Rules themselves are very biblical, but this interpretation of them is less so.)

Oswald Chambers put it quite sternly when he wrote, If sympathy is all that human beings need, then the cross of Christ is an absurdity and there is absolutely no need for it. What the world needs is not “a little bit of love,” but major surgery. If you think you are helping lost people with your sympathy and understanding, you are a traitor to Jesus Christ. You must have a right-standing relationship with him yourself, and pour your life out in helping others in his way – not in a human way that ignores God. (from December 20th of My Utmost for His Highest)

Favorite quotes:
Gratitude is the center of a hospitable heart.

We greet the morning sun each day with our to-do lists, while the monk greets the sun with prayer and silence.

None of us likes or welcomes the sudden interruption or change that alters everything. But hospitality is not a planned event… It is the stance of the heart that is abandoned to Love.

Posted by hopeinbrazil at 7:18 PM