The Four Feathers by A.E.W. Mason

A good name is more desirable than great riches;
to be esteemed is better than silver or gold.
Proverbs 22:1

What is honor? Once lost, can it be regained? At what cost? Is Pacifism equal to
cowardice? A.E.W. Mason's 1902 novel The Four Feathers seeks to answer these questions.

It took me a while to become invested in this novel, but I'm glad I stuck with it. The story 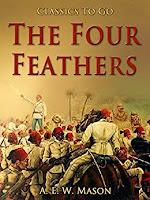 begins in 1870 with veterans of the Crimean war seated around a table together. As they discuss their past battles, a young, sensitive boy listens to their stories and wonders if he can successfully join in the tradition of his military ancestors.

Although Harry Feversham follows in their footsteps, he has no taste for military life. When he leaves the army, he is branded as a coward and must regain his honor in the eyes of those he loves. Since it takes him six years to do that, you won't find a lot of fast-moving action in this book. But if you enjoy better-than-average writing and some good ideas to chew on, you'll appreciate this book, which has been the source of at least four movie adaptations.

My one quibble with the book is that in order to exonerate Harry Feversham, Mason depicts career military men as less than human. Early in the book a group of them is described as men of one stamp; no distinction of uniform could obscure their relationship—lean-faced men, hard as iron, rugged in feature, thin-lipped, with firm chins and straight, level mouths, narrow foreheads, and the steel-blue inexpressive eyes; men of courage and resolution, no doubt, but without subtleties, or nerves, or that burdensome gift of imagination;

Still, I enjoyed the book a great deal, especially because of the excellent narration done by Ralph Cosham.

Posted by hopeinbrazil at 6:23 AM

The long-term-mission-to-regain-something aspect of this novel makes it sound a bit like the Count of Monte Cristo!