What I Read and Watched in September 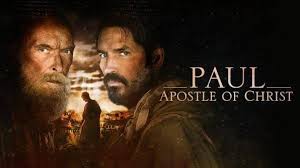 Life wasn't quite as crazy this month so I was able to read quite a bit and watch several better-than-average movies. After reading Barbed-Wire University, I watched the 1953 movie Albert R.N., which accurately portrays life in a European POW camp.

Christian movies are often sappy and theologically thin, so I was pleasantly surprised by Paul, The Apostle of Christ. The writing and acting were good and the ending was magnificent. (Quite a nice change from modern drivel that teaches if you come to Christ all your problems will go away.) One more movie I watched was The Trip to Bountiful. I'm a sucker for any movie based on a play because it usually has good dialogue. This 1985 film is about an elderly woman who dreams of returning to the town where she grew up. It is slow-moving, heartbreaking, and garnered the Oscar for best actress for Geraldine Page.

As far as reading goes, I slowly worked my way through C.S. Lewis' Mere Christianity (3 to 4 pages a day) and loved every bit of it. I listened to The Scarlet Pimpernel (for the umpteenth time) whenever I was working in the kitchen. But that was only after I'd listened to House at Pooh Corner TWICE. Lovely!

Three books that were okay, but that didn't wow me, were Miss Read's Celebrations at Thrush Green, Anthony Trollope's Dr. Wortle's School, and 101 Great American Poems.

Anyone else familiar with Kate Howe's Victober Book Challenge? Every year in October she encourages her listeners to read more Victorian literature. I'm already a big fan, but I appreciate the nudge to add more of it to my literary diet. I hope to read one Charles Dickens title and one Thomas Hardy. Here's her video introducing the challenge.

Posted by hopeinbrazil at 12:07 PM

I just finished reading The Weight of Glory and am already missing Lewis's voice. Maybe Mere Christianity would be a good re-read--and I want to do it as you did, slowly and thoughtfully.

I've heard good things about the Paul, The Apostle of Christ movie. I'd heard of The Trip to Bountiful but didn't know anything about it. Now I want to look it up.

I've read Mere Christianity twice and ought to again some time soon. The Scarlet Pimpernel is a favorite! I love the film version with Anthony Andrews and Jane Seymour, even though it differs from the book in places.

I'm listening to the Classics of British Literature lectures per your recommendation some months ago. Very interesting!