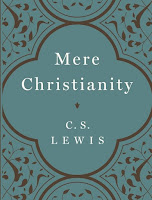 Frankly, one does not review a classic like Mere Christianity. I can only give my impressions and an overview of its themes. The book is based on a series of broadcasts that Lewis gave on BBC radio between 1941 and 1944 to explain the basic tenets of Christianity. It continues to have great impact because Lewis avoided theological jargon and explained each concept as simply as possible.But even though he had a gift for cutting through rhetoric to get to the heart of an issue, there are still difficult bits.

I always enjoy Christian authors who dare to go against the modern myth that if you come to Christ, all your problems will go away. The idea that God is an indulgent father who makes our wishes come true and demands little in return is understandably popular. But Lewis is having none of that!

Regarding the belief the God is an impersonal life-force: This is a tame sort of God. You can switch it on when you want but it will not bother you. [It has] all the thrills of religion and none of the cost. (p. 35)

The Moral Law does not give us any grounds for thinking that God is good in the sense of being indulgent, or soft, or sympathetic. There is nothing indulgent about the moral law. it is as hard as nails. It tells you to do the straight thing and it does not seem to care how painful, or dangerous, or difficult it is to do. (p.37)

Atheism is too simple. And I will tell you of another view that it too simple. It is the view I call Christianity-and-water, the view which simply says there is a God in heaven and everything is all right - leaving out of all the difficult and terrible doctrines about sin and hell and the devil... (p.46)

Book 4, Chapter 9 emphasizes the painful changes that must take place in us as we are being formed into Christ's image. I will restrain myself from sharing the dozens of other passages I highlighted, but must mention that the most important section in the book may be Book 3, Chapter 1 on "The Three Parts of Morality" because it answers the vital question, "If what I'm doing doesn't hurt anyone else, then how can it be wrong?"

He starts the book making a case for doctrine and moral law, but finishes by making a plea for us to fully surrender our lives to Christ. Lewis contends that the more we lose ourselves in Christ the more human (and fully ourselves) we become. Look for yourself, and you will find in the long run only hatred, loneliness, despair, rage, ruin and decay. But look for Christ and you will find Him, and with Him everything else thrown in. (p.190)

This is a book to read carefully and prayerfully. Well worth the effort!

Posted by hopeinbrazil at 4:47 AM

I loved reading this along with you. It would be wonderful to share an afternoon talking about it over a mug of tea or a glass of water.

Thanks for your thoughts on this. I've been on a C.S.Lewis splurge & have been re-reading some of the books I've read previously as well as reading those I haven't read - Surprised by Joy at present.

This one is also on my nightstand, and yes . . . "one does not review" such a great work. Well said. Even so, I appreciated your thoughts today!

I felt that way when I read and reviewed this years ago. There are so many good quotes, it's hard not to share many of them. This is a book I need to reread every few years.

Yes, Carol B., It would be a special treat to drink tea and talk books!