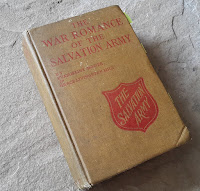 I read Grace Livingston Hill books voraciously in high school, sometimes one per day. But as my reading tastes matured, I moved on to other authors and never looked back. So I was a little stunned when my sister-in-law gave me The War Romance of the Salvation Army. Who knew that Hill even wrote non-fiction? Her fans might be confused by the title since she was a popular writer of romance novels, but the word "romance" in the title refers to the old-fashioned definition (adventure and chivalry).

Evangeline Booth, the commander of the Salvation Army in the U.S. (1904-1934) was too busy to write a book herself, so she gave hundreds of letters and documents to Hill. Hill strung them together into a fascinating, albeit overlong, array of anecdotes about the 40,000 Salvationists who offered physical and spiritual comfort to men in the trenches of France during WWI. Most stories were told in a straightforward manner, but a few bordered on sentimentality, which should be no surprise to those who are familiar with GLH novels.

The "Sallies" did everything they could: from driving ambulances, to helping in hospitals, to frying thousands of doughnuts for war-weary soldiers. The Salvation Army hut had candy and toiletries for sale, free lemonade and coffee, and often a Victrola for playing records from home.The grateful men filled up the tent for the evening church services.

I thoroughly enjoyed this glimpse into the sacrificial service of the men and women of the Salvation Army during this horrific time in world history. It was serendipitous that I read this just after finishing The Gospel Comes with a House Key because, in a way, the Salvationists were showing hospitality by bringing the comforts of home to the fighting men.

Written in 1919, The War Romance of the Salvation Army gives a fascinating look at one denomination's outreach to soldiers during World War One. A short video about this is available here.

Posted by hopeinbrazil at 8:04 PM

I never knew that either, I will certainly track this one down. I admit to having such a fondness of Grace Livingston Hill and did the same in high school.