What I Read and Watched in October

Seven books and seven movies this month. (Husband out of town for ten days!) 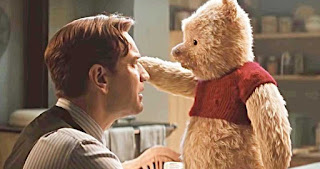 First, the movies. 1) Shazam came highly recommended by our son who said it had Christian themes. It was pretty juvenile, but I appreciated one strong image of a demon devouring a man, a gruesome reminder of what sin does to us. 2) Downton Abbey was beautiful in its painstaking attention to details and there were several happy endings for beloved characters. But it was ruined for me by one of the sub stories. 3) Christopher Robin with Ewan McGregor was delightful. 4) The Bookshop was an understated British film about a woman who opens a book store in a little village. The movie is sad, yet somehow triumphant. 5) Tolkien was beautifully filmed, but showed only a slice of Tolkien's early life. 6) I watched a couple of Hallmark movies, but, frankly, I rarely remember their titles because they all run together in my mind.

I'm reading mostly non-fiction these days. 1) Matt Perman's rambling treatise on time management, How to Get Unstuck, 2) Rosaria Butterfield's third book, The Gospel Comes with a House Key, 3) The Class Meeting by Kevin Watson, 4) As Long as They're Laughing, a look at a 1950's quiz show, and 5) Poetry as a Means of Grace by Charles G. Osgood (English professor at Princeton in the early 1900s.) 6) A Little Moonlight by Betty Neels was the only fiction title I read. Finally, I read The War Romance of the Salvation Army by Grace Livingston Hill, which took me completely by surprise because it was definitely not a romance.

Posted by hopeinbrazil at 3:34 AM

That sub story in Downton Abbey is the reason I chose not to see the movie. Have you seen To Walk Invisible? Unfortunately it has two or three uses of the f-word and a totally gratuitous (although brief) scene of sexuality, but I loved the portrayal of the Bronte sisters.