The Real Meaning of "Prodigal" 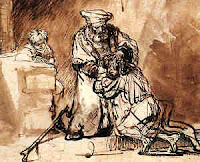 Occasionally I'll come across a word definition that leaves me gobsmacked. Imagine my astonishment when I learned the real meaning of the word "prodigal" in my recent meanderings through literature. (It comes up twice in Count of Monte Cristo.) I've been raised on Bible stories since babyhood and have a degree in theology so you'd think I would have known what it really means. In common (incorrect) usage a "prodigal" is someone who leaves and then returns. In actuality it means: someone who is wastefully extravagant. It makes perfect sense in the context of the story of the Prodigal Son. But it makes even more sense to say that his father was "prodigal" because he was wildly lavish with his forgiveness and grace. I'll say it again, I'm astonished!

Posted by hopeinbrazil at 11:28 AM

Wow! Thanks for that definition, I can't believe that it doesn't mean what I thought it meant all these years!

Don't you love these little epiphanies in life? Thanks for sharing it, Hope.