A Man for All Seasons - Worthwhile Movie #6 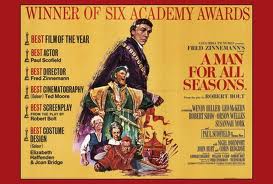 How can I convince you to watch a long, slow moving film with an unhappy ending?  I wasn’t enthusiastic about watching it myself, but planned to do it for my husband’s sake because he loves movies based on true stories.   We were surprised to be treated to some of the finest dialogue we’ve ever heard in a movie.  We laughed out loud over and over, not because it was funny, but because we were filled with delight at truth being proclaimed with such eloquence and beauty.

Sir Thomas More was a contemporary of Henry VIII and was famous for opposing the king’s divorce to Katherine of Aragon (and subsequent marriage to Anne Boleyn).  A Man for All Seasons details his lonely stand against pressure to sanction the marriage.  Because More was a man of utmost integrity and honesty, false charges had to be trumped up against him and he was eventually tried for treason.

I can’t remember the last time I saw a film when a man of faith was portrayed so well.  Paul Scofield does a superlative job in this 1966 Oscar winner.  By the way, Orson Welles plays a small part in the film as Cardinal Wolsey and he’s horrifically good.
Posted by hopeinbrazil at 2:51 PM

We watched this a few years ago and I remember enjoying it very much.

One good thing about not watching TV is that you have a higher tolerance for long takes, slower movies.