Sir Gawain and the Green Knight by Morpurgo 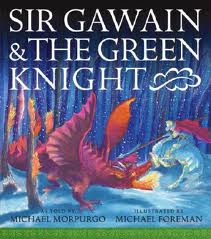 A few years ago I bought J.R.R. Tolkien’s translation of Sir Gawain and the Green Knight.   The original version was written in a 14th Century English dialect that has not survived and Tolkien sought to make the story accessible to modern day readers.  However, he strove to retain the poem’s original cadence and it seems somewhat stilted at times.

Since our family is reading War Horse by Michael Morpurgo, Morpurgo’s name has been on our radar and my son found his children’s version of Sir Gawain. It seemed less intimidating than Tolkien’s version, and I dug right in.  At first, I read one chapter from Morpurgo and followed it with the same chapter in Tolkien.  But by chapter three I was so caught up in the story that I discarded Tolkien’s version and read Morpurgo’s straight through to the end.

The story begins with King Arthur and the Knights of the Round Table:

It was Christmastime at Camelot, that time of year when all King Arthur’s Knights gathered to celebrate the birth of their Lord and Savior, Jesus Christ.  For fifteen joyous days, after holy Mass each morning, there was nothing but feasting and dancing and singing, and hunting and jousting too.  Jousting was the favorite sport, each Knight striving to unseat the mighty Sir Lancelot – but rarely succeeding, of course.  And all was done in fun, in a spirit of comradeship, for they were happy to be all together once more at this blessed time. (p. 12)

The festivities are interrupted by a huge green giant who enters the banqueting hall.  He dares any knight to take up his challenge.  Gawain accepts and his adventures begin.  I don’t want to share any details because going into the story without knowing the particulars is what makes it such a page turner.  As Sir Gawain faces trials and temptations, will he be true to his chivalric code?  Will he survive the wrath of the terrible green giant?  Will he return safely to Camelot?

While I enjoyed the story very much, I was puzzled at this paraphrase for children because one of the subplots involves a woman who is more than willing to be unfaithful to her husband.  Maybe that’s why Michael Dirda calls this “an adult Christmas story”.   Anyway, I enjoyed Morpurgo’s translation very much.
Posted by hopeinbrazil at 6:12 PM

I haven't read Morpurgo's version, but I did go through Tolkien's and enjoyed it fairly well. All in all, though, my favorite medieval epic is still Seamus Heaney's translation of Beowulf. :D

And I totally agree with you about the content - SGATGK isn't a children's story at all.

I love Gawain and the Green Knight, ambiguous as it is, but I agree it isn't a good story for young kids.