The Dean's Watch by Elizabeth Goudge 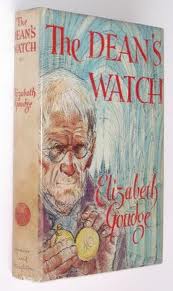 Adam Ayscough’s miserable childhood led him to seek God.  Isaac Peabody’s wretched childhood made him reject Him.  The Dean's Watch recounts their slow and painful journey toward friendship and healing.

Adam is the dean of a great cathedral in an unnamed English city.  His ugly appearance and natural shyness cause people to avoid him.  Yet he is a man with a capacity to love deeply.  He lavishes that love on his unresponsive wife and on the city (as he crusades for reforms).

One of his only friends is the lonely spinster, Miss Montague.  She challenges the Dean to “take a little joy” by risking to love people.  “The contemplation of sunsets and vegetable matter has its serene pleasure, and involves no personal exertion, but I think that is not what you want in your old age.” (220)  As he takes her advice, he finds that “Life had taken on a strange richness. . . .  Until now life for him had meant the aridity of earthly duty. . . .  Now he was aware of something else, a world that was neither earth nor heaven, a heartbreaking, fabulous, lovely world. (p. 193)

His new world is heartbreaking because in it he becomes acquainted with other people’s pain.  He himself pays a heavy price to alleviate their suffering.   The recurring theme in the book is the transforming power of sacrificial love.

It was there in the window, finished five days ago, the best clock that Isaac had ever made.  He had thought that he would not be able to put it in the window, so much did it seem to be a part of himself, yet suddenly he had put it there, in the center, the other clocks grouped about it like lesser stars about the moon.  He had put it there because it was Christmas.  To him it was only a fairy tale that love had leaped from heaven on fire for the manger and the cross, but tales are potent things and this one was in his blood, and so he had to do it; he had to give his best to the city. (247)

You start the book thinking the title is about a timepiece, but end it knowing it is about a man’s vigilant love for his city. Definitely one of my top ten favorite books of all time.
Posted by hopeinbrazil at 7:42 PM

I thought this was a beautiful, wise book too. Thanks for the great review.

Your comment earlier this week made me hope this was the Goudge title you would write about. OH! How I love The Dean's Watch. I have four copies of it. You make me want to pick it up and revisit this old friend. It's been more than ten years since we communed.