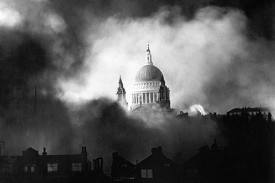 I know I’m strange.  Jeff Shaara’s WWII novel left me cold. But this obscure non-fiction book about middle-aged men who valiantly protected St. Paul’s during the war made my heart sing.

I had always heard that Churchill insisted that St. Paul’s Cathedral be preserved at all costs.  Saint Paul's Cathedral in Wartime highlights how it was done.  The author was the dean of St. Paul’s at the time, and he and two hundred volunteers formed “The Watch” to vigilantly put out any fires that came near the church.

On December 29, 1940 twenty-eight incendiary bombs fell on St. Paul’s.  Watchers from a nearby building thought the cathedral was doomed and news correspondent Edward R. Murrows announced on the air that the church has been destroyed.  But it hadn’t been.  In spite of lack of water from broken water mains, the watchers put out the fires before any permanent damage could result.  That night the most famous picture of the cathedral was taken, the one in which it is shrouded in smoke from the fire bombs.

The next morning almost every building around the cathedral was gone, but St. Paul’s towered over the wreckage as if representing the invincibility of the English against the German war machine.

Because this book was written in 1946, the stories seem fresh and give you a feel for what it was like to have been there.  I heartily enjoyed reading about the quiet heroism of these volunteers whose love for St. Paul’s caused them to risk their lives on a daily basis.
Posted by hopeinbrazil at 7:17 PM

Have you read Connie Willis? A couple of her time-travel novels feature St. Paul's Cathedral during World War II.

I'm fairly sure I've recommended this one to you before, but you really should read Connie Willis's two volume novel, Blackout and All Clear. St. Paul's is a major character in the novel.

oh, dear. Another one for my wish list. This looks really good! Thanks for sharing.

Yes, Sherry, you told me about the Connie Willis books and they are on my wish list.

Hope, you make me want to read!

Ha! Carol, you always have the same effect on me!

The dean was my grandfather. Yes, they were very brave.