The Carlingford Chronicles by Margaret Oliphant 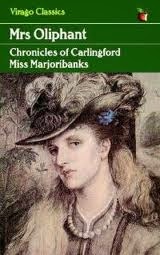 Good writers ruin you for mediocre ones. I should never have read George Eliot before picking up Oliphant.

I had written earlier about discovering Margaret Oliphant through G.K. Chesterton's book on Victorian authors. I did not like the first book I tried and followed someone's suggestion to read the Carlingford Chronicles. According to Wikipedia they are loosely related stories which take place in the same city yet involve different clergymen. I was hoping for some Trollope-like insights into clerical life, and was sorely disappointed. Actually, I liked the first book I read, The Rector, but following the Wikipedia list I assumed I had to go back and read Salem Chapel (first in the chronology). Big mistake.

Salem Chapel doesn't fit the description of a prequel to The Rector. In fact, without having read The Rector first I would not have know about the relationship between Lucy Wodehouse and Wentworth that is just hinted at in SC.  This book had none of the lighthearted wit of the second.  In fact, Arthur Vincent, the protagonist, is an insufferable bore. Not only is he too proud to reach out to the simple folk in his parish, he's self-centered, jealous, vengeful, sullen and unbending. Furthermore, this was a typical example of a Victorian "sensation" novel complete with a villain out to ruin a lady's virtue and the subsequent necessity of her having brain fever so no one really knows what happened till she comes out of it. UGH!

The sequels (The Doctor's Family, The Perpetual Curate, Miss Marjoribanks, and Phoebe Junior) are all on my Kindle, but I am not sure I'll be making the effort to read them.

If you've read any of the above titles and can recommend them, please let me know.