The Giver by Lois Lowry 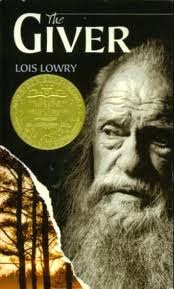 I was recently given a copy of Son, Lois Lowry’s conclusion to The Giver. It has been six years since I read (and loved) Giver, so I decided to give it a quick re-read before delving into the newer book. Would having read two classic dystopian novels (1984 and Brave New World) in the mean time diminish the pleasure and impact of Giver the second time around? Not a bit.

Jonas lives in a highly structured future society where husbands and wives are matched up  by the government and each family unit is assigned one male and one female child (not related in any way to the designated parents). Jonas is almost twelve and awaiting the big day when all the "Twelves" receive their job assignments, which are career paths chosen for them by city officials according to their natural gifts. He is surprised to be chosen as the "Receiver of Memories," a very unique position in the community.

As soon as children reach puberty they are given a pill to control their "stirrings." This medication also serves as an equalizer for all emotions. Love and anger are barely recognizable as such. Jonas is allowed to stop taking the medicine since his assignment requires him to feel joy and pain. He feels threatened by this at first and then comes to believe that the colorless, safe world in which he lives is actually more dangerous and diabolical than the one that freedom would bring.

Common dystopian themes surface throughout the story: Government mandated families, and motherhood as a function vs. a vocation. Sexuality is something to be repressed. Books (and free thinking) are off limits. A substandard life is the norm since pain and risk cause too much chaos.

Lowry claimed in an interview that the book was not meant to be specifically Christian and that it should appeal to all religions. But as a believer, I found many of the themes fascinating, particularly the necessity of one person suffering for the sake of all the others.

Then there's the euthanasia theme. And the theme of naming as nurturing. Babies in the nursery are only given names once it is proved they will be healthy. Parents in the book will call a child by his birth number when they are cross with him (basically dehumanizing him.) The classic biblical example of valuing something in this way is found in Isaiah 43 when God tells Israel, "I have called you by name." This same theme was expertly done by Madeline L'Engle in the third book of her Wrinkle in Time series, A Swiftly Tilting Planet.

The Giver is a well-written and thought-provoking book. I'll be reviewing its conclusion next week.

Posted by hopeinbrazil at 3:42 PM

Totally agree with everything you said! I've read The Giver at least 5 times. I have yet to read Son. It will be hard to find a copy here...

Dystopian is not my "go to" read but you've got me interested in this one.