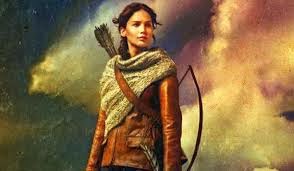 I know that this is supposed to be a literary blog and that I try to recommend books and movies that are a cut above what passes for entertainment in our culture. But I have to put my two cents in about the second Hunger Games movie. I surprised myself by liking the books and surprised myself even more by loving the film version of The Hunger Games: Catching Fire. It was amazing. I liked it even better than the print version, which never happens.

Some of the most powerful themes of the trilogy are clearly seen in this second installment: The fact that hope is more powerful than fear. The fact that it's better to die for something that matters than live in a hellish society (Don't even get me started on how so many characters in the movie were willing to lay down their lives for a purpose greater than themselves.) In both the first and second films, there is a strong emphasis on the strong protecting the weak. And in Catching Fire the "rejects" form an alliance to beat the powers that be - a perfect example of I Corinthians 1:27 where the weak are used to shame the strong. Astounding.

I hate modern movies for their overdose of sex, profanity and violence. This film has lots of the latter, a few curses and no hanky panky. See it.

(My only question is: "Why doesn't Katniss ever run out of arrows?")