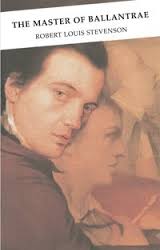 Don't ask me why I was expecting this to be a tedious read. It was anything but.

Master of Ballantrae is the story of two brothers, one good and one bad. James, the wicked one, is heir to the family fortune, is daddy's favorite, and can charm the rattle off a snake. The good brother, Henry, is quiet and self-effacing and not much liked by anybody. The narrator of the story is Mr. MacKellar, the steward of the Durrisdeer estate and one of Henry's only true friends.

The novel is set in England in 1745.  James, "the Master", runs off to join Bonnie Prince Charlie who is striving to restore the Stuarts to the throne.  When James does not return after several years, he is presumed dead and Henry marries Allison, his brother's fiancée, and becomes the new heir.

But the Master is not dead, nor does he die at several other opportune moments.  He seems to have nine lives and with each one he comes back to haunt and torment his brother. Honestly, to read of his constant villainy juxtaposed with his power to beguile and deceive gave me the shivers. And it made the book very hard to put down. As G.K. Chesterton said in his book on Victorian authors, "In The Master of Ballantrae Stevenson proved with a pen of steel that the Devil is a gentleman, but is nonetheless the Devil."

I kept wondering why I've never heard anyone talk about this book. Maybe its because there is no happy ending.  Hatred destroys everything. Then why would I recommend it? For one thing, it shows how even a good man can be corrupted when he harbors bitterness. Second, the book is beautifully written. I am already a huge Stevenson fan because of his lyrical and enchanting poetry (Child's Garden of Verses), but this is the first time I've dipped into one of his adventure novels.

Apparently there were two awful movies based on this book. (1953 with Errol Flynn as James, and 1984 with Michael York) Better to stick to the book.

Posted by hopeinbrazil at 1:00 AM

Haven't read this one but I'd like to - I'm partial to anything Scottish. My dd keeps telling me I should read his book Catriona.